21:00  Brief presentation of the project and the first publication of Waves 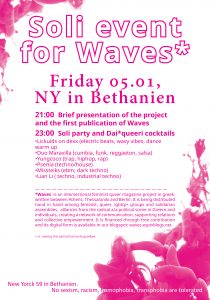 *Waves  is an intersectional feminist queer magazine project  in greek, written between Athens, Thessaloniki and Berlin. It is being distributed hand in hand among feminist, queer, lgbtqi+ groups, solidarian assemblies, alliances from the radical a/a political scene in Greece and individuals, creating a network of communication, supporting relations and collective empowerment. It is financed though free contribution and its digital form is available in our blogspot waves.espivblogs.net

This text is an invitation to a soli-event for the financial support of our intersectional feminist-queer magazine ~Waves~ whose second publication is in editing process somewhere between Greece and Germany. At the beginning of this soli-night (at 21:00) there will be a brief presentation of our magazine project and its first publication. We consider this event as an opportunity to celebrate our re-gathering and a way to express our refusals alongside our desires, our own small Sabbat.

We, the authors of ~Waves~ and co-organisers of this event, are individuals who met previously in feminist and various other political processes in the city of Thessaloniki in Greece. Mov Kafeneio1was our main common political ground for many years. Now however, we live in different cities across Greece and Germany. Our decision to proceed with the publication of this magazine comes from a wish to maintain the common thread that unites us and is fired by our shared desire to continue making queer, feminist critique whilst also participating in struggles in Greece and elsewhere.

We would like this event to be inspired by radical queer and feminist politics, reflecting the ideas which embody our magazine. We would like to create space for the multiplicity of our desires, sexualities and bodies, so that each one of us can feel comfortable (to the greatest possible extent) and so that we can discuss, get to know one another and dance. During this night no sexist, transphobic, homophobic or macho behavior will be tolerated, nor do we want cis straight privilege to prevail in our party; Our intention is to create more space for less privileged categories such as lesbians, trans, bisexuals, gays, migrant women*.

Through dancing, (we would like) to question dominant cis, straight privilege and privileges in general, to reflect upon these and create space for people that are invisible in their daily lives, whilst also questioning visibility issues within the lgbtqi+ community. During our event, we would like all these groups of people to feel safe(r) and try to make safe(r) spaces a collective issue, part of a political culture that starts way before this party and keeps on after the end of it. As the awareness group at Bethanien points out; we are all responsible for the party, we are all part of the evening, the party is a soli-party, whose success lies on our collective contribution. However, we do not consider nor do we wish for this event to be exclusionary, only focusing on the lgbtqi+ communities, but rather as something open to each individual who recognises and acknowledges feminist and queer politics as a necessary and integral part of struggles for social liberation.

Ιn struggles for social liberation, our positions, the distances we have to cross, our paths, desires and aspirations differ. This is an acknowledgement that has emerged over the years by observing how we co-exist with people within or outside the radical lgbtqi+ community in our greek context. We are aware of the fact that our insecurities differ according to our multiple identities and complicated stories. We are aware of the fact that it is a difficult task to provide safety whilst creating an inclusive and not exclusive space, we also recognise that it is possible that each one of us might hurt or offend someone else.

Exactly for these reasons, we would like to draw your attention to your personal boundaries and the boundaries of the others. It is crucial for us that everyone remembers that the way to interact with each other is by explicit consent and that different individuals have different boundaries.

This soli-night has come into existence with a lot of effort, difficulties and doubts just like any other political action would. We consider it be to a way, among others, for individuals with common oppressions, shared expectations and antagonisms to meet. It is important for us that this event is carried out with attention and care for all. We are interested in a political culture, which considers safe(r) politics to be a collective issue and a struggle, to be taken just as seriously on the streets as in our political spaces.

We are happy to invite you to our soli-event that will take place at New Yorck in Bethanien (Mariannenplatz 2a) on Friday, 5th of January, from 21:00 to 5:00.

P.S.1: During the whole night there will be an awareness team sitting at a table near the entrance, available to discuss issues related to safety. People of the awareness team will also be present inside the party (wearing pink patches).

P.S.2: Smoking is allowed in specific rooms (marked with signs).

1Mov Kafeneio was a queer-feminist group in Thessaloniki which was active from 2008 to 2017. Its concerns were focused on repression and power as a result of gender relations within the heteronormative, patriarchal and capitalistic regime. It was based in Fabrika Yfanet squat and it was taking place every Wednesday, creating a space for info events, presentations, film projections and political discussions against patriarchy, heteronormativity, capital, nation and state.

Why a queer-feminist magazine? Why from a distance and why call it Waves?

This edition you are holding in your hands is for us a new way of expressing our love, a connection. It is yet another way to express our angers, fears, proximities, intimacies and distances. Personal emotions that occur from and refer to the socio-political field in which we recognise ourselves.

It is also a means to reunite with loved ones. Girls who met in the assembly of Mov Kafeneio, in the occupied factory of Yfanet. Some of us participated in the creation of the group, wishing for the political space in which we were active to acquire feminist characteristics, others came to participate in the group at a later point. In any case, this assembly was the place we met, where we grew up, where we got politicised and formed our feminist struggles.

It was a procedure through which we transformed together. Due to discontinuous and different trajectories of time, we felt the need to repeat this reunion, as we have been for a long time apart. Some left for Berlin, others for Athens, some stayed in Salonika. By printing this magazine we try to devise for us a new time-space condition, so as not to lose this common thread that connects us. The thread of radical queer feminisms. This edition constitutes for us a new spectrum of coexistence, creation and struggle, in an attempt to mold our lives with momentum, care and tenacity.

Because on our route we came along the waves of feminism and our lives were never the same ever again. Because a wave is defined as a disorder transmitted through time and space, as well as through the vacuum. Because if you dream of waves it indicates sexual desire, because waves are a periodical phenomenon, just like our edition, because “The Waves” is the novel by Virginia Woolf that talks about the imprint of time in our lives and our common experiences. Because we wish for the waves of feminism to multiply and to continue to rock the boat of the social and the political, to create more struggles. For all these reasons. For all the reasons in the world.

Why a queer feminist magazine?

Using this magazine as a vehicle, we desire to create yet another crack in the adverse reality of our everyday life. Through an intersectional approach, we deal with issues of gendered violence, class oppression, racist rhetoric, sexual suffocation, attempting to show how one oppression constitutes and at the same time is constituted by another. Alongside this, we want to promote our needs and desires and shed light on feminine experiences. To talk about the de-pathologisation of femininity, about the strength hiding in passivity and in the bodies that stand constantly or persistently, or are just standing. About sentimentality and about why it’s ok to fall backwards, inwards, sideways, out and to get submerged in it or by it. About the sentiment of community, about transforming sexualities, female solidarity and sisterhood, comradeship and collective struggle.

We imagine this magazine as a space of expression, creation, empowerment, as well as a means of political propaganda and extroversion. Through it, we wish to share political beliefs, experiences, tools, practices, the prospect of a community. We want to present stories and cultures that highlight the cracks, deflections and dissimilarities in the seemingly stocky and homogeneous gendered and nationalist narrative. The struggle of the feminist groups against that reality, the struggle of women immigrants in detention centres, the struggle against labour exploitation, homophobia, transphobia and sexual harassments. Our everyday struggles for visibility and our personal resistances make us stronger, inspires and mobilises us.

In short, what are we going to read in the present issue?

Here, we choose for each one of us to express herself one by one or all together, in several ways and means.

Therefore, we look at women’s drag and the dramatisation of the women’s experience through exaggeration and camp aesthetic, as a liberating procedure and strategy.

We make an introduction to the theory of intersectionality in order to see the multiple systems of power that we fight against as well as the different aspects of our struggles. We consider it important to focus on and at the same time deconstruct sexism, fascism, racism, patriarchy, heteronormativity and so many other violent relations of everyday life.

We recall gendered concerns of our youth.

We re-browse Bataille’s “Story of the Eye”, in an attempt to detect the course of our desire and sexuality and the relationship between pleasure and guilt.

Moreover, we open critical themes concerning the wider social movement field and we wonder how the anti-authoritarian critique on religion combines with Islamophobic reactionary arguments and expresses itself with macho attitude.

We recall the events of 2016 New Year’s Eve in Koln, in an attempt to open a discussion about the sexisms and racisms expressed during that time, along with the anti-sexisms and anti-racisms. We touch upon the limits between the latter, their problematic and occasionally proximate coexistence.

We register experiences of detained women immigrants in the detention centre of Elliniko, and focus on their struggles against their detention, during its operating period. We reflect on the correlation between immigration and detention and we explore the gendered sign of oppression and the violence that women immigrants face.

Waves is an irregular periodical edition that is written individually and collectively in Thessaloniki, Athens and Berlin. We choose to circulate it without charge. We promote free financial contribution as a way of material support for the project; it is a part of our politics. It is being distributed in its printed form among feminist, queer, lgbtqi, women’s groups as well as collectives that stand in solidarity, individuals and allies from the wide radical and a/a space, thus creating a network of support, communication, empowerment.

Its web format is on our blog: waves.espivblogs.net. We would be very glad to receive comments and feedback on our e-mail: